What is the SREP? 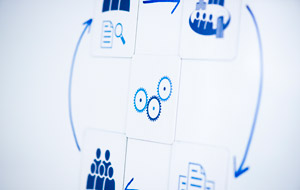 Supervisors regularly assess and measure the risks for each bank. This core activity is called the Supervisory Review and Evaluation Process, or SREP for short. It summarises all the supervisor’s findings of a given year and gives the bank “homework”.

Specifically, the SREP shows where a bank stands in terms of capital requirements and the way it deals with risks. In the SREP decision, which the supervisor sends to the bank at the end of the process, key objectives are set to address the identified issues. The bank must then “correct” these within a specific time.

What elements do supervisors look at?

To ensure a level playing field, it is crucial to apply the same yardstick to all banks. The SREP gives supervisors a harmonised set of tools to examine a bank’s risk profile from four different angles.

How supervisors check if a bank is healthy

Business model
Does the bank have a sustainable business strategy?

Governance and risk
Are management bodies fit and risks dealt with properly?

Capital
Does the bank have sufficient buffers to absorb losses?

Liquidity
Is the bank able to cover short-term cash needs?

How is the SREP used?

The Joint Supervisory Teams carry out the SREP continuously and prepare an individual SREP decision once a year. Every bank receives a letter setting out the specific measures it needs to implement in the following year.

This SREP decision is tailored to each bank’s individual profile. In general, every bank has to comply with legal requirements that lay out the minimum amount of capital it has to hold. This is often referred to as “Pillar 1”.

Now the SREP enters the equation. Tailored to the individual bank, in the SREP decision, the supervisor may ask the bank to hold additional capital and/or set qualitative requirements (usually referred to as “Pillar 2”). The latter could refer to the bank’s governance structure or its management.

What does this mean for the banks?

Each bank is different: some focus on traditional commercial banking, while others look after other companies’ financial assets. Some are exposed to one specific sector, whereas others spread their activities more widely across different segments.

While following one common methodology to ensure fair and consistent supervision, these differences are reflected in the scope, intensity and frequency of the individual review process for each bank. Supervisors from the ECB and the national supervisors, together in the Joint Supervisory Teams, take into account a bank’s potential impact on the financial system, its riskiness and its status, i.e. whether it is a parent entity, subsidiary or individual institution.

Typically, the supervisor will require a bank to hold more capital as an additional safety net or to sell certain portfolios of loans to reduce its credit risk. In the most extreme case, the supervisor may ask a bank to change its management or to adapt its business strategy to become more profitable.

Is the SREP something new?

The SREP itself isn't new, having previously been performed by the national supervisors. The novelty of the SREP under the Single Supervisory Mechanism is that now one common methodology and one common timeline are being applied to all significant banks under European banking supervision.

The concept of SREP was first introduced in 2004 with the Basel II accords set by the Basel Committee on Banking Supervision. Updated rules were implemented across the EU in 2006 and have been followed ever since by the different national supervisors.

The biggest banks, which are supervised directly by the ECB, know what to expect: the process is becoming more transparent and cross-border banks in particular benefit from a greater harmonisation of requirements.

The ECB sent out the first SREP decisions in early 2015. These were still based on national approaches and were complemented by the results of the 2014 health check, known as the “comprehensive assessment”.

The second round of SREP decisions, which were finalised at the end of 2015, was based, for the first time, on a common approach applied across all significant banks. This was an important step towards achieving a level playing field in European banking.