What are supervisory colleges? 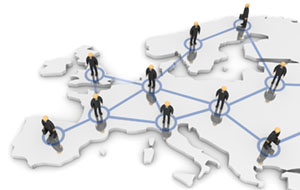 In an increasingly globalised world – as so clearly demonstrated by the financial crisis – it is crucial that banks operating in more than one country are supervised as effectively as possible. Supervisory colleges play an important role in this regard, helping to improve the supervision of cross-border banks.

“Supervisory college” in a nutshell

A supervisory college is essentially a permanent, though flexible, structure comprised of an international bank’s “home” and “host” supervisors: the Basel Committee on Banking Supervision uses the term very broadly as the set of ongoing relationships among these supervisors, covering any contact, be it in the form of teleconferences, videoconferences, letters, emails, or communication via secure websites.

The underlying objective is to help college members develop a better understanding of a cross-border bank’s risk profile and vulnerabilities and to provide them with a framework for addressing the key issues that are relevant from a supervisory perspective. Information sharing and cooperation on an ongoing basis are essential tools for strengthening the supervision of such banks.

The extent of interaction between supervisory college members varies depending upon the particular banking group and supervisors concerned, and a proportional approach is applied.

Here are some examples of the information that may be shared among college members:

Supervisory colleges in the EU context

In the European Union supervisory colleges are not only structures for fostering close cooperation and sharing information but also have a decision-making role, reaching for instance joint decisions on an institution’s internal model, its risk exposure or its capital base.

The Capital Requirements Directive (CRD IV) – part of the EU’s legal framework for banking supervision – states that the colleges should ensure an aligned work programme and harmonised supervisory decisions. Mapping templates, which among other things show the extent and nature of banks’ cross-border presence, are an essential part of this process. These are complemented by written coordination and cooperation arrangements that provide the basis for realising cooperation and the exchange of information among college members ‒ and thus joint tasks and activities and joint decision-making.

Under the new framework introduced by the Bank Recovery and Resolution Directive (BRRD), colleges must also assess the recovery plans of cross-border banks and reach a joint decision on the assessment of such plans.

Key tools for the implementation of the supervisory college framework in the EU are the guidelines developed by the European Banking Authority, as well as the relevant regulations adopted by the European Commission.

The ECB, which is responsible for the direct supervision of significant banks in the euro area, may take part in a supervisory college as a home (consolidating) supervisor or as a host supervisor: it acts as chair of the college in the former case.