The 2016 EU-wide stress test includes 51 banks covering 70% of total banking assets in the European Union. It is led by the European Banking Authority (EBA), which develops the methodology for the exercise. The aim of the exercise is to analyse how a bank’s capital position develops on the basis of end-2015 data over a period of three years until 2018, under both a baseline and an adverse scenario.

The European Commission provides the baseline scenario whilst the European Systemic Risk Board (ESRB) provides the common adverse scenario. ECB Banking Supervision is responsible in the euro area for coordinating instructions to banks, receiving the resulting information and performing the quality assurance, i.e. validating banks’ data and stress test results.

Separately, the ECB conducts in parallel a stress test of an additional 56 banks under its direct supervision, using the same methodology. This is an internal supervisory exercise conducted by the ECB. Therefore, the results are not published by the ECB. However, if a bank chooses to publish its own results it can do so but the publication does not imply ECB endorsement.

2. What is this exercise really testing?

The exercise is analysing how a bank’s capital position develops assuming a static balance sheet over a period of three years until 2018, under both a baseline and an adverse scenario. The adverse scenario reflects the four systemic risks that were considered by the ESRB to constitute the most material threats to the stability of the EU banking sector: (i) an abrupt rise in currently low global bond yields, amplified by low secondary market liquidity; (ii) weak profitability prospects for banks in a low nominal growth environment amid incomplete balance sheet adjustments; (iii) rising debt sustainability concerns in the public and non-financial private sectors amid low nominal growth; (iv) prospective stress in a rapidly growing shadow banking sector, amplified by spillover and liquidity risk.

Compared to 2014 this year’s adverse scenario is stricter as it contains more conservative elements. Moreover, shocks have been frontloaded, so that the adverse impact materialises earlier during the stress test horizon. As bank losses follow macroeconomic stress with a lag, this feature increases the expected impact of the scenario. The methodology has also further evolved. The inclusion, for the first time, of a dedicated operational and conduct risk stress test methodology in the 2016 exercise is a good example in this regard.

The stress test has a three-year horizon and uses static balance sheets. This means that, for the purpose of the stress test, it is assumed that assets and liabilities that mature during the stress test horizon are replaced with similar financial instruments in terms of original maturity, credit quality, geographical exposure, etc. As a result, the business mix and model remains unchanged and any countermeasures that a bank would take against the stressed assumptions over the three-year period are not taken into account. For this reason, banks might actually fare better in reality than in the stress test’s adverse scenario.

The details of the methodology and the baseline and adverse scenarios can be found on the EBA’s website.

3. Does the stress test account for the impact of the outcome of the referendum in the United Kingdom on EU membership?

The adverse scenario is significantly harsher than analysts’ forecasts of the negative impact of Brexit on the economy. Although no singular event such as Brexit is assumed, the projections for the gross domestic product (GDP) of the euro area under the adverse scenario are more severe for every year of the stress test horizon than the negative effect on GDP growth foreseen by analysts as a result of Brexit.

4. How does the stress test account for non-performing loans?

EU-wide stress tests are solvency exercises to check if the banks remain solvent after incurring losses connected to a change of the economic conditions. The EBA stress test of 2016 takes the situation of a bank as at 31 December 2015 as a starting point and simulates the effects of different scenarios defined by the European Commission and the ESRB, applying the methodology developed by the EBA. The stress test methodology accounts for the non-performing loan (NPL) stock, as banks are required to model the impact of the adverse scenario on the NPL amount. In particular, the exercise puts further stress on a bank’s defaulted loans, resulting in additional loan losses in the adverse scenario.

5. Is there a pass/fail threshold? What supervisory actions are taken if banks do not meet the capital demand?

The stress test is not a pass/fail exercise. No hurdle rates or capital thresholds are defined for the purpose of the exercise. However, the findings of the stress test will be part of the ongoing supervisory dialogue. As such, the ECB will use the stress test as crucial input for the overall 2016 Supervisory Review and Evaluation Process (SREP), which will close later this year. In this context, it will also be used as one input factor for the supervisory capital demand for banks.

The “stacking order” of the different capital components according to the EBA guidance is explained in Figure 1. Under the stacking order, banks facing losses will first fail to fulfil their Pillar 2 guidance. In case of further losses, they would next breach the combined buffers, then Pillar 2 requirements, and finally Pillar 1 requirements.

If a bank does not meet its Pillar 2 guidance, supervisors will carefully consider the reasons and circumstances and may define fine-tuned supervisory measures. Should the capital supply of a bank be further reduced, leading to a breach of the combined buffers, automatic measures restricting the distributable amounts of banks (e.g. dividends or bonuses) are activated. A further depletion of the capital supply would lead to a breach of Pillar 2 requirements, resulting in a wide set of additional supervisory actions. 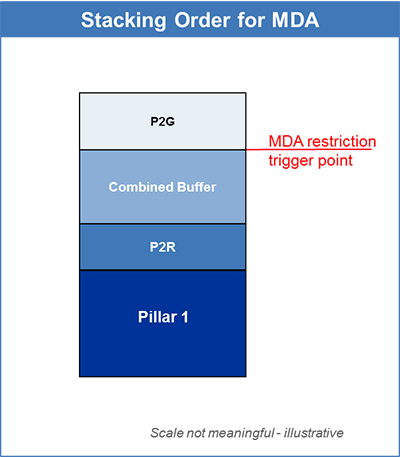 6. Do you expect capital demand in the system to increase on average due to the stress test exercise?

ECB Banking Supervision announced already last year that it perceives the current level of capital in the banking system of the euro area to be satisfactory and intends to keep the supervisory capital demand stable – all things being equal. The stress test results are therefore not expected to lead to an increase of the overall level of capital demand in the system. In the 2015 SREP decisions the capital demand was defined by Pillar 1 plus Pillar 2 requirements plus combined buffers. In view of this year’s new introduction of the component of Pillar 2 guidance, the capital requirements of a bank in terms of Pillar 1 plus Pillar 2 requirements will be reduced – all things being equal. As a result, the trigger for the Maximum Distributable Amount (MDA) will go down – also all things being equal. At the same time, the overall capital demand, including Pillar 2 guidance, will remain about the same.

The MDA is the maximum amount a bank is allowed to pay out, for example for bonuses or dividends. A bank whose capital ratio falls below the MDA trigger point faces restrictions on the amount of distributable profits. Pillar 2 guidance is not relevant for the MDA trigger (see Figure 1).

7. How will the stress test results be factored into the SREP?

The qualitative results of the stress test will be incorporated into the definition of supervisory measures and can even have an impact on Pillar 2 requirements.

The quantitative results of the stress test, namely the fall in the Common Equity Tier 1 (CET1) ratio a bank faces between its starting point at end of 2015 and 2018 in the adverse stress test scenario, will be one input factor for Pillar 2 guidance.

In defining Pillar 2 guidance, the ECB will use a wide range of information. One benchmark will be a bank’s post-adverse scenario result in relation to a capital ratio of 5.5% — or, in the case of global systemically important banks (G-SIBs), 5.5% plus the G-SIB buffer. This result is further adjusted up or down, taking into account other factors including the specific risk profile of the individual institution and its sensitivity towards the stress scenarios; interim changes in its risk profile after the cut-off date of the stress test (31 December 2015); consequences of the static balance sheet assumption of the stress tests and measures taken by the bank to mitigate risk sensitivities, such as relevant asset sales. Consequently, the stress test results will feed into Pillar 2 guidance in a non-mechanistic way.

8. How is the capital conservation buffer accounted for in the 2016 SREP?

ECB Banking Supervision is taking a different approach in the 2016 Supervisory Review and Evaluation Process (SREP) regarding the capital conservation buffer (CCB). The CCB will no longer be included on a fully-loaded basis.

Some Member States (Cyprus, Estonia, Finland, Italy, Latvia, Lithuania, Luxembourg and Slovakia) decided to impose the full CCB on their banks without any phase-in as of 1 January 2016. Other Member States opted for a four-year phase-in. This difference led ECB Banking Supervision to set a SREP ratio based on a fully-loaded CCB for directly supervised institutions as part of the 2015 SREP. This decision has been revised for the 2016 SREP. Countries can take a deliberate choice, whether they want to apply tougher capital requirements or to adjust to the phase-in approach of many peers. Some countries, such as Portugal, have already changed their phase-in rules.

The CCB is part of the Basel III capital rules and is designed to ensure that banks build up capital buffers which can be drawn down as losses are incurred. The CCB is to reach 2.5% of the risk-weighted assets as of 1 January 2019 at the latest.

9. How does the 2016 stress test compare to stress tests in other jurisdictions?

The stress test exercises of the EBA, the UK Prudential Regulation Authority (PRA) and the Comprehensive Capital Analysis and Review (CCAR) of the Federal Reserve Bank are not directly comparable as the methodology, scenarios and time horizons differ significantly. Disregarding the differences, the overall impact of the EBA stress test is in line with the PRA 2015 exercise. Compared with the CCAR 2016 exercise, the EBA stress test is stricter than the CCAR adverse scenario, but less severe than the severely adverse scenario of the CCAR.

10. How does the 2016 EBA stress test compare to the comprehensive assessment/stress test of 2014 (since the latter fed into the 2015 SREP)? What if a bank’s capital ratio in the 2016 stress test is lower than the Pillar 2 capital demands in the 2015 SREP – would it be fair to deduce that this bank will need to raise fresh capital?

First, the 2014 stress test, as part of the comprehensive assessment, was a much broader exercise than the current one. In 2014, 130 banks took part in the comprehensive assessment, which consisted of an asset quality review and a stress test. In preparation for the ECB’s takeover of its supervisory responsibilities, the exercise aimed to identify possible capital shortfalls and ascertain if any banks required immediate recapitalisation measures. As euro area banks have since moved to more of a steady state and have become better capitalised overall, the aim of the 2016 exercise is rather to assess remaining vulnerabilities and understand the impact of hypothetical adverse market dynamics on banks. The stress test as part of the 2014 comprehensive assessment and the 2016 stress test are hence quite different in nature.

In addition, the newly introduced changes in the Pillar 2 structure (breakdown into requirements and guidance) mean that the SREP 2015 cannot be directly compared with the findings of the 2016 stress test. It would thus be wrong to deduce that a bank must immediately raise capital if its capital ratio in the 2016 stress test is lower than the Pillar 2 capital demanded in the SREP 2015.