What are internal models? 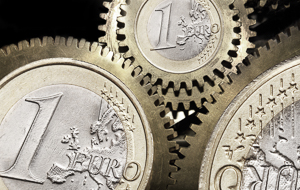 Internal models are statistical models, which can be used by banks to determine how much capital they need. The more risks a bank has, the more capital it needs.

EU banking rules require banks to maintain enough capital to cover unexpected losses, which are driven by the risks banks have on their books. This is called “capital requirement”.

When a bank measures these risks to determine whether it fulfils the capital requirement, it can use either

Banks need the explicit permission of their supervisor to use internal models.

Supervision. Explained. Why do banks need to hold capital?

How does it work?

Calculating how much capital a bank needs

To assess whether a bank has enough capital, we use capital ratios such as the Common Equity Tier 1 (CET1) ratio. CET1 capital is the highest quality of capital as defined by banking law. It typically includes shares, retained earnings and other reserves. The CET1 ratio shows the relationship between a bank’s CET1 capital and its risk-weighted assets.

Risk-weighted assets are a measure of the risks a bank has on its books. They reflect how risky its assets are. A bank’s assets typically include loans made to its clients as well as cash, in short everything the bank owns.

The CET1 ratio of a bank increases if its capital increases (e.g. the bank issues new shares or retains earnings) or if its risk-weighted assets decrease (e.g. the bank reduces the risks on its books by selling assets or replacing them with less-risky assets).

Under the standardised approach, banks apply standard risk weights to their assets. Internal models, on the other hand, allow banks to estimate the risk themselves. They are tailored to individual banks and therefore allow risks to be measured more accurately. The result is a more efficient use of capital and better risk management. Internal models for credit risk allow the estimation of risk parameters, such as the probability of a loan defaulting within one year or the magnitude of the loss incurred if a borrower is unable to pay back the loan.

Banks that decide to use internal models need to invest in developing and maintaining high-quality models. They need to have sound internal validation and oversight processes in place.

If not regularly updated and closely supervised, internal models can in some cases also underestimate a bank’s risks. And that’s why banking supervisors need to closely monitor banks’ internal models.

If a bank wants to use its own models it needs permission from the supervisor. Before granting this, the supervisor checks whether the bank meets the applicable requirements.

We carried out a large-scale targeted review of banks’ internal models (the TRIM project) from 2016 to 2021. One of the aims was to ensure that banks comply with the requirements set by regulators, thereby reducing inconsistencies and unwarranted (i.e. non-risk-based) variability of risk-weighted assets.

The targeted review of internal models (the TRIM project)

Regulators decided to introduce an additional safeguard: the output floor. Once fully implemented in 2027, the output from internal models (i.e. the risk-weighted assets banks calculate by using such models) will not be allowed to fall below a certain threshold. Regulators set this output floor at 72.5% of the risk-weighted assets for the same bank as calculated using the standardised approach.

The output floor was introduced as a back-stop to reduce excessive variability of risk-weighted assets and to make risk-weighted capital ratios more comparable.