A closer look at time commitment of non-executive directors

Non-executive directors play a crucial role in the governance of banks. They are supposed to oversee, monitor and challenge the management function, in particular with regard to the effectiveness of internal controls and the soundness of governance structures. To this end, they must maintain a good understanding of the bank’s business and main risks, and prepare for and participate in management body meetings. This cannot be achieved without sufficient time commitment on their part.

But what is a sufficient time commitment for a non-executive director? There seems to be no easy, one-size-fits-all answer to this question. On the one hand, having multiple mandates, particularly in addition to a full-time position, could limit directors’ ability to exercise effective oversight. But on the other, having multiple responsibilities could in fact be beneficial for directors, by enabling them to draw on a broader set of experiences in their non-executive role.

Fully aware of this, supervisors always apply a case-by-case approach when assessing the time commitment of non-executive directors. For fit and proper assessments, supervised banks have to declare, in detail, how much time prospective non-executive directors intend to allocate to their oversight function and how much time they will commit to all positions they hold. These declarations are then assessed, taking into account the appointee’s background, their function and responsibilities as a board member, and the specificities and context of the supervised bank. For such assessments, ECB Banking Supervision has developed specific policies, which are summarised in the Guide to fit and proper assessments. In addition, ECB Banking Supervision regularly discusses its expectations regarding adequate time commitment with banks.

The amount of time that non-executives said they would devote to their oversight function was strongly linked to the size of the bank and to their specific level of responsibility on the board. Non‑executive directors in larger banks and those with additional responsibilities, for example as members of board committees, tended to say they would devote more time to their role. 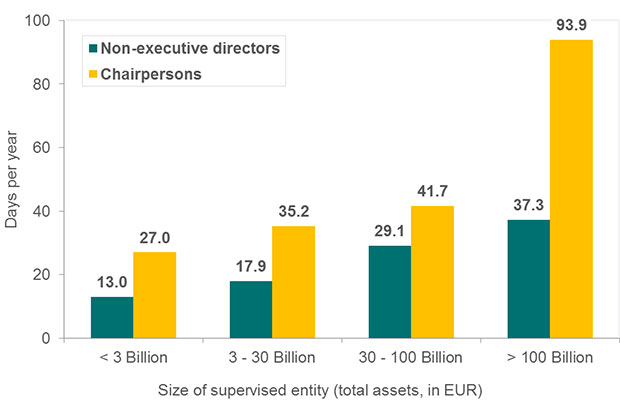 Reproduction is permitted provided that the source is acknowledged.

Media contacts
Are you happy with this page?
Yes No
What made you unhappy?
Page not working Information not useful Design not attractive Something else
Thank you for letting us know!