In its annual exercise of identifying and evaluating the risks that may affect the euro area banking system, ECB Banking Supervision in cooperation with national supervisors highlighted a number of risk drivers that will require close monitoring and continuous analysis. The outcome serves as an important input when defining the ECB’s supervisory priorities and determines focus areas for the regular monitoring and analysis of risks to directly supervised banks.

Low economic growth in the euro area negatively affects the business environment within which euro area banks operate, corrodes asset quality and hampers banks’ capacity to provide new lending. It feeds back to many other risk drivers, most notably low interest rates, high levels of non-performing loans (NPLs) and fiscal imbalances in the euro area.

High stocks of NPLs remain a concern for a number of euro area countries. Amid already weak banking sector profitability, a high level of NPLs may lead to further losses for banks by triggering additional impairments or write-downs. It also makes banks more vulnerable to shifts in market sentiment and can hinder new credit creation. Moreover, there might be adverse feedback loops between high NPLs and weak economic growth. Although supervisory actions to promote a sustainable reduction of NPLs in banks’ balance sheets have been initiated (including the ECB guidance on non-performing loans), further coordinated efforts and structural reforms are needed.

The low interest rate environment also affects banks’ profitability. Low interest rates promote the macroeconomic recovery in the euro area and ease banks’ funding conditions, supporting their profitability. At the same time, however, they can at some point threaten banks’ business models by exerting pressure on net interest margins or the management of interest rate risk through changes in customer behaviour. While the overall profitability of euro area banks remained relatively stable in 2015 and 2016, it is still low by historical standards, and bank revenues are set to be increasingly under pressure in a “low for long” interest rate environment. Rethinking cost-income structures and improving cost efficiency is therefore crucial. This is especially true if we consider that below average cost-to-income ratios were a common feature of directly supervised institutions that persistently outperformed their peers in terms of overall profitability since the end of 2014.

Historically low asset yields and compressed global risk premia have created a potential for a sudden reversal. This could have a significant impact on asset valuations, collateral requirements and wholesale funding costs. Such risks can be exacerbated by geopolitical uncertainties, which are on the rise, especially in the aftermath of the United Kingdom and Italian referendums but also in the light of recent and potential future election outcomes in the U.S. and Europe. So far, however, no material liquidity, funding or operational risks have been identified in the euro area banking sector.

Notwithstanding the benefits of a progressively safer and more resilient financial system, banks’ transitioning to the new regulatory environment may reveal vulnerabilities. Euro area banks made significant progress in strengthening their capital and liquidity positions following the introduction of post-financial crisis regulation. The further advancement and completion of the regulatory agenda and the gradual entry into force of new provisions should contribute to a substantial reduction of regulatory uncertainty. However, banks may still find it challenging to meet stricter requirements while maintaining sufficient profitability.

Finally, euro area banks are not immune to other risks such as cybercrime and IT disruptions, misconduct, or growing non-bank competition, especially from “FinTech” companies. Such risks, materialising in fragile – albeit improving – market and economic conditions may have the potential to create destabilising forces.

These risks fed into the following three supervisory priorities for 2017: (1) business models and profitability drivers, (2) credit risk, with a focus on NPLs and concentrations, and (3) risk management. A number of supervisory initiatives will be carried out based on these priorities.

The risk drivers can be visualized in a risk map of the euro area banking system that focuses on two dimensions (see Figure below). They can be measured first according to their probability of materialisation and second to their impact. The risk map also expresses visually the fact that risk drivers can be linked through potential transmission channels. Thus the true risk could be bigger than the impact of risk drivers measured in isolation. 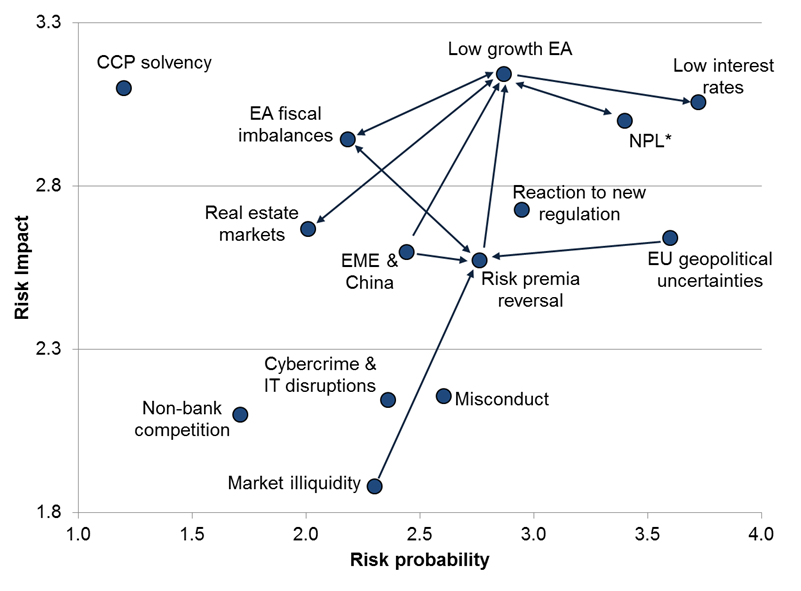 Notes: Risk impact and probability are scored between 1 (low) and 4 (high). Arrows represent the potential transmission channel from one risk driver to another (only main first order effects represented).

*NPL: this risk driver is only relevant for euro area banks with high non-performing loans ratios.